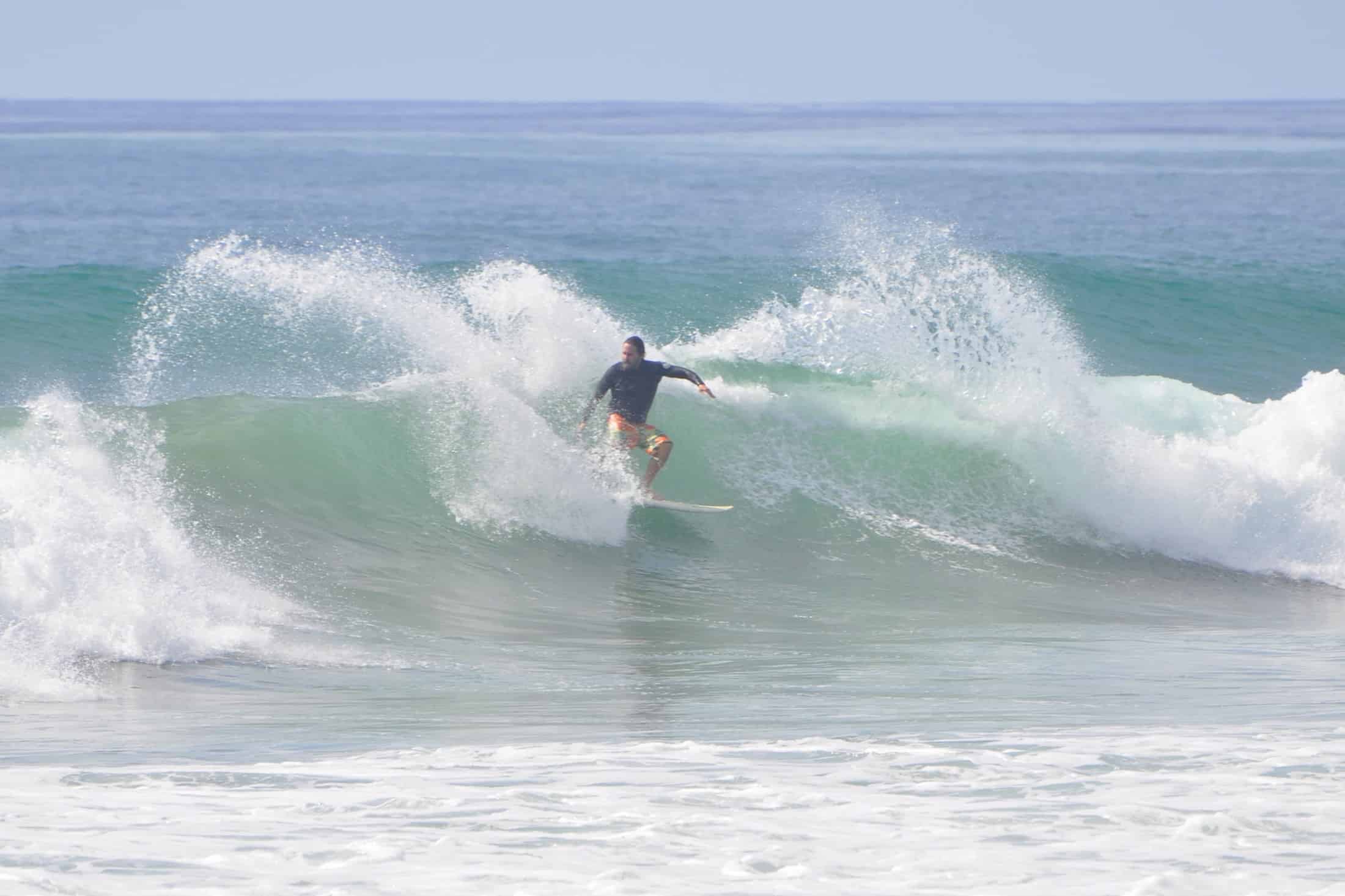 Welcome to Playas y Plazas. This is a travel blog about Mexico. I live in Guadalajara, Jalisco and travel up and down Western Mexico looking for food, culture, and surf. The name of the blog was inspired by an old Hawaiian surf company called Town and Country. I want to explore the rural beaches of Mexico and the plazas of every town between Tijuana and Tapachula. These are my stories.

Growing up on the border

I’m from San Diego but I have been in Guadalajara since 2009. I have been fascinated with Mexico since I was a kid exploring the Baja Peninsula. My parents gave me a touch of wanderlust and San Diego’s proximity to the border gave me the means to explore.

My dad’s hand-me-down Baja California travel guides were written before the transpeninsular highway was paved and he taught me to drive in the dunes south of Rosarito Beach. Back in the 1960s my mom and her friends drove a VW bus down to Puerto Vallarta and Guadalajara where she developed a love of Talavera tile and started our collection. My mom still loves exploring: from Tzintzuntzan to Tijuana, looking for exquisite pottery and good food.

My Catholic high school was only 20 minutes from the border. A nun that taught English would take us to an orphanage in Tijuana to bring supplies and play with the kids. In the 1990’s you didn’t need a passport to cross back and forth. A nun could take a handful of kids across the border, teach them how to take a taxi, speak a little Spanish, and nobody was weird about it.

We were used to crossing the border at an early age. Tijuana, Rosarito Beach, and Ensenada are fun places to hang out and surf during the summer. There is a liberal minimum drinking age and we had friends to show us around. I have great memories of Mexico as a kid.

My Dad took my sister and me to Europe when I was 16 years. We road-tripped through 10 countries in three weeks.

In junior college, I spent a month backpacking through Central America and the Caribbean followed by a semester studying in Costa Rica. This was a huge life experience that advanced my surfing, my Spanish, and my worldview.

I finished a bachelor’s degree in Global Economics at UC Santa Cruz where I took Spanish every quarter including theater and Spanish for Spanish speakers. I spent one semester at the University of Chile and took a month to backpack through South America.

After college I found myself working in Silicon Valley recruiting engineers for Google’s global army. While at Google I was based in Mountain View, CA but I spent a significant amount of time working out of the offices in São Paulo, New York, and Santa Monica. I was looking at resumes for some of the best engineers on the planet and saw a pattern of international education that I wanted to emulate.

The Institute of the Americas on the UCSD campus in La Jolla, California looks over the cliffs and the Pacific Ocean. It is an important hub joining together Latin America, The United States, and Asia. Interning at the Institute of the Americas I shook hands with former President of Mexico Ernesto Zedillo and listened to presentations by top Mexican politicians. I wanted to be a part of that global elite that speaks multiple languages fluently and truly understands different cultures. Someone who could seamlessly move between countries and speak Spanish at the professional and academic level.

I applied to the Tecnológico de Monterrey campus in Guadalajara for grad school and quickly fell in love with Mexico. Travel was a big part of my education. I visited the capital frequently and voraciously read about the relationship between the United States and Mexico.

I also met my future wife.

It is hard to believe that I have more than ten years of experience in the restaurant industry. I went from waiting tables in San Diego to owning and operating something like a franchise in Guadalajara, Mexico. I have come to really enjoy the food service industry, from agriculture to markets and restaurants. I have spent a lot of my time in Mexico finding and growing heirloom ingredients, exploring the regional markets, and meeting cooks.

In La Jolla, California I worked at two restaurants that really taught me about food. Barbarella, on La Jolla Shores Drive, is a European bistro that takes a lot of influence from Alice Waters and Thomas Keller. The chef who opened the restaurant worked for Thomas Keller before moving south. The owner would spend lots of time in the area farmer’s markets buying local heirloom fruits and vegetables for daily specials. I still remember tasting an heirloom tomato for the first time. I couldn’t believe that I have lived for 20 years and had never tasted a real tomato.

Sushi on the Rock is another La Jolla institution that worked with local fishermen to serve amazing sushi. There were tanks with live sea urchins and live lobsters, and the fishermen were bringing in buckets of the best quality seafood I had ever seen. These two experiences pushed me to try new and exotic foods.

I think it was working in those two restaurants that pushed me to continue studying food systems as a lifelong passion. I transferred to the University of California, Santa Cruz and lived right next door to the Alan Chadwick Garden. The organic horticulture and agriculture program at UC Santa Cruz is world-famous. The food (and marijuana) grown in the Santa Cruz area is nothing short of amazing.

Imagine trying an heirloom tomato for the first time but constantly finding new varieties of fruits and vegetables that you had only known through agricultural farming. I remember eating kiwis so sweet you could eat the skin and more lettuces than I have ever seen before. Agriculture and horticulture in Northern California are very special. And, this area has close ties to Mexico.

Operating a Restaurant in Mexico

When I came to Mexico to study at Monterey Tec in 2009 I was on a student visa. Monterey Tec expects that students will be working and will use data from their work to complete projects in just about every course. With a student visa, I was not able to work in technology as I had before returning to school. Some friends with a restaurant let me do projects for them. I did a statistical analysis of sales and headcount and another project on corporate social responsibility.

Four years after originally interning with Grupo Pasta, I invested in their 14th restaurant as an operating partner. Along with my partners, we built a restaurant almost from scratch. We converted a mid-century house into a successful restaurant. There was a cocina economica in the house before us but it was not a high-volume restaurant. We structurally changed the house, upgraded the electrical, plumbing, HVAC and built a professional kitchen.

The experience of operating a restaurant let me experiment and learn with a professional kitchen, and I didn’t have to wash any dishes. The cooks that I had the pleasure of working with taught me how to make all sorts of sauces and protiens. We had a convection oven and a sous vide machine to play with. I brought in a tortilla press and all sorts of exotic ingredients that I found in the market. Working in the restaurant industry also introduced me to other restaurateurs and let me see other kitchens.

These are a few of the cooks that have inspired me.

In my free time

I spend my free time learning about Mexico; history, culture, and a whole lot of food. The restaurant has allowed me to meet a lot of talented chefs and hear about the food and beverage industry from all angles. The recommendations I get from guys and girls in the kitchen blow any guidebook out of the water.

I also like to surf. Mexico has a lot of coastline and there are some spectacular breaks in these parts. There are waves for surfers of all levels of experience and adventures to be had.